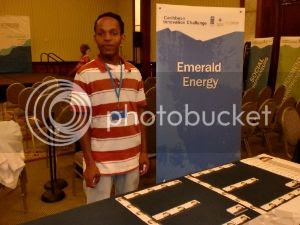 Meet Kamara Jerome, the 20 year old up and coming entrepreneur from Questelles, St Vincent who sailed away with the Best Environmental Award in the Caribbean Innovation Challenge Finals held on April 26th at the Barbados Hilton. In an era where youth and in particular young men are seen as being dissolute it is truly heart warming to recognise the drive and talent of this young man. The competition with a stated objective of promoting youth entrepreneurship is a component of the UNDP project Youth Innovation (Youth-IN): A Caribbean Network for Youth Development, which responds to the needs of youth identified in the report of the CARICOM Youth Commission (2010): 'Eye on the Future: Investing in YOUTH NOW for Tomorrow's Community'.
Open to young people between 16 and 29 projects were evaluated and narrowed down to twenty finalists from which the various winners were chosen. Jerome,who in 2012 was the recipient of a National Youth Award for Science and Technology winning entry "Emerald Energy" was a solar powered boat. According to Jerome, the idea for his boat came on a trip from the Grenadines to mainland St Vincent. During the trip, the boat ran out of gas approximately six miles from Bequia in what is termed locally as the "Bequia Channel". A wait of over two hours ensued before help came that allowed the ship to reach Port Kingstown. During the wait, Jerome observed that the wind gusts were very strong and the sun was at its peak and the idea of producing a prototype powered solely by wind and solar energy was conceived. Months later, the idea became a physical product that captured the attention of the Vincentian public. In the weeks leading up to the finals the Agency for Public Information visited his workshop and observed fist hand the detail that went into the creation of the boat. For Vincentians, who were unaware of the Challenge it was a timely boost as almost immediately the conversations began on social media.

I am discovering my tastes are eclectic. I aim to change the world one child at a time Wish me well